The common link to many noncommunicable HIV-associated comorbidities appears to be inflammation.1 HIV-associated cardiovascular disease (CVD), neurocognitive impairments, and non-AIDS-defining cancers may also be influenced by sex hormones that might activate inflammation and the immune system.1

In low- and high-resource countries, the population aged >50 years with HIV is increasing, and researchers are noticing that more deaths among these individuals are not directly associated with communicable diseases.1 The puzzling aspect in this age cohort is that individuals treated with antiretroviral therapy (ART) who have undetectable viral loads still exhibit systemic inflammation and immune activation.1,2 As a result, there is a flurry of inquiry as to how inflammation and sex differences affect the trajectory of health outcomes for people living with HIV.

The CV risk for people with HIV is similar to that for those who have type 2 diabetes.3 Despite this, people with HIV are less likely to be screened and treated for CVD.

The common pathway to CV risk may be inflammation, which is responsible for plaque development that precipitates the accumulation of low-density lipoprotein (LDL) particles and insulin resistance.3 This CV risk may be attenuated by lifestyle changes, such as diet and exercise, as well as pharmacologic therapy.3 To mitigate CV risk in patients with HIV, clinicians should screen for hypertension, diabetes, dyslipidemia, and tobacco use.3

“What is clear from recent data is that patients with HIV appear to be less commonly screened for risk factors of [CVD] and as a result are less aggressively receiving primary prevention management compared with the general US population,” says Faisal Rahman, BM BCh, a research cardiologist from Johns Hopkins University School of Medicine in Baltimore, Maryland.

INTREPID was the first study to determine the efficacy of statins in reducing markers of immune activation and arterial inflammation in patients with HIV.4 Toribio and colleagues randomly assigned 252 HIV-infected patients on ART (median age, 50 years) to receive pitavastatin 4 mg or pravastatin 40 mg for 52 weeks. At the end of the study, patients in the pitavastatin group vs those in the pravastatin group had significant reductions in soluble CD14(-10.0 vs. 0.6%; P =.02), oxidized LDL (-26.9 vs -17.5%; P =.02), and lipoprotein-associated phospholipase 2 (-26.6 vs -15.5%; P =.005).4

The statins were chosen based on their minimal interactions with antiretroviral medications. Patients receiving darunavir were excluded from the study because of its interactions with pravastatin. There were no significant changes in the levels of inflammatory markers sCD163 or hsIL-6 with either statin in the study. In previous studies, both biomarkers had been implicated in activating plaque in people with HIV.4

“Clinicians may now be more aware of the potent effects of statins and in particular, pitavastatin, to reduce indices on monocyte activation in HIV,” notes Steven Grinspoon, MD, professor of medicine at Harvard Medical School in Boston, Massachusetts.

When asked about potential sex differences in CV risk for HF in men with HIV, Tomas Neilan, MD, MPH, director of the cardio-oncology program at Massachusetts General Hospital, Boston, Massachusetts, responded: “The findings are similar in that both men and women in this larger cohort with HIV and HF are at a higher risk of hospitalization with HF. These patients are also at increased risk of CV death.”

Researchers are examining the use of the cerebrospinal fluid biomarker neopterin, which is elevated in patients who have HIV-associated dementia, to potentially provide early detection of cognitive impairment. Another biomarker, neurofilament light chain, signals axonal injury that can predict severity and survival in neurocognitive disorders. Much of the research in neurocognitive studies seeks to address the relevance of early initiation of ART and whether it can prevent poor neurologic outcomes in patients with HIV.6

“Providers are coming to recognize that suppressing HIV-1 RNA is only the first step in caring for people aging with HIV infection,” explains Amy C. Justice, MD, PhD, professor of medicine and public health at the Yale School of Public Health in New Haven, Connecticut. “Increasing consideration needs to be given to how to optimize the balance between addressing ongoing health concerns, including inflammation, and avoiding polypharmacy.”

As the population of people living with HIV is growing older, there is greater interest in their morbidity and mortality, particularly for noncommunicable diseases. Inflammation is thought to play a role in comorbidities such as CVD, neurocognitive impairment, and non-AIDS-related cancers. More research is warranted to better understand how clinicians can manage patients with HIV, who appear to be at higher risk for these diseases. 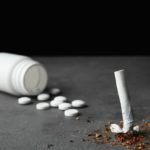 Varenicline Effective for Smoking Cessation in People With HIV