The investigators of this study sought to examine the effect of daily HIV PrEP with tenofovir disoproxil fumarate plus emtricitabine (TDF-FTC) on the enteric microbiome profiles of healthy individuals absent of HIV infection.

Microbiota specimens were collected through rectal swab prior to initiating PrEP and 48 to 72 weeks after adherent PrEP.

To identify microbiome shifts, researchers assessed the relative abundance of each bacterial family and genus using next-generation gene sequencing of the 16S ribosomal RNA both before and after daily PrEP administration.

The overall microbial diversity of each participant was comparable both before and after 48 to 72 weeks of daily PrEP.

Changes in microbiome balance were not associated with variable factors such as age, race, PrEP duration, tenofovir diphosphate blood level, and drug use. These results suggested that microbiome shifts were likely induced by daily PrEP.

This study was limited by a small population size, and future studies should examine microbiome shifts in a large cohort with long-term outcomes.

The study investigators concluded that long-term PrEP contributed to significant shifts at both the family and genus levels of the enteric microbiome; Streptococcus levels decreased and Erysipelotrichaceae increased following a daily TDF-FTC regimen. By characterizing the microbiota signatures and side effects of PrEP, adherence may be improved, thus helping prevent HIV infection.

Disclosure: One author declares associations with the pharmaceutical industry. Please see original reference for a full list of authors’ disclosures. 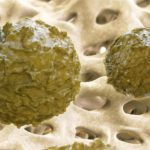