Patients with body dysmorphic disorder (BDD) show an obsessive preoccupation with real or imagined cosmetic imperfection or defect: acne, scars, pigmentation, oiliness, redness, paleness, facial vessels, hair loss, excessive facial hair. Complaint may involve a dysesthesia (ie, burning, itch, crawling sensation). Preoccupation usually involves the face and head, skin and hair being the most common focus. Scalp and genital region can be involved. BDD may affect 2% to 15% of the population. BDD can be considered a delusional disorder, therefore by definition, reassurance is futile since one cannot be “talked out of a delusion.”

Symptoms can be incapacitating. Depression is frequently evident. Previous suicide attempts are not uncommon. Dissatisfaction with previous physicians and medical-surgical procedures is common. Interactions with BDD patients are often long, difficult, and emotionally draining.

Persons at risk for BDD have any or all of the following:

– Oversensitivity to societal images and expectations of beauty

– History of childhood teasing or taunting

BDD is often a severe and disabling condition. A combination of dysfunctions in frontal-subcortical circuits, temporal, parietal, and limbic structures, and possibly involving hemispheric imbalances in information processing, may produce both the characteristic symptoms and neurocognitive deficits seen in BDD.

BDD patients are at high risk for attempted and completed suicide. Some studies suggest 25% of patients with BDD attempt suicide.

BDD patients are probably at higher risk for medical and surgical complications owing to the increased number and aggressiveness of procedures sought to “fix their imperfection.” Up to 25% of patients with anorexia nervosa meet criteria for BDD. The presence of anorexia worsens the prognosis.

– Empathize with their degree of distress by telling them that you are concerned about how much of their time, energy, and happiness are being usurped by their symptom or complaint.

– Suggest that the intensity of the emotional attachment may indicate a body image disorder.

– Validate that their concerns are important to you. Dismissive or disparaging comments can be potentially devastating for the patient, potentially increasing the risk for suicide.

– Psychiatric referral is preferable but not always feasible.

– Euphemisms for psychiatrist or psychologist that de-emphasize mental illness such as “skin-emotion specialist” may increase the likelihood of patient acceptance.

– Advise caution regarding information and recommendations from on-line sources and groups.

Cognitive-behavioral psychotherapy: Only psychotherapeutic intervention proven to help the patient reduce the frequency, severity, and intrusiveness of symptoms. These are active, “here and now” reality-based interventions with reasonably good efficacy for the majority of treated patients.

Serotonin selective reuptake inhibitors (SSRIs) are most effective. Serotonin and norepinephrine reuptake inhibitors (SNRIs) may also be effective. No single agent is proven superior. All SSRIs and SNRIs carry a theoretical risk for mania and increased risk of suicidality. Both are helpful for obsessive preoccupations, depressive symptoms, anxiety, and repetitive behaviors (ie, picking).

If at all possible, avoid any cosmetic interventions. The BDD patient will almost invariably be dissatisfied with the result, and they may worsen the disorder and possibly increase liability and other risks to the clinician.

– Identify the patient early, before cosmetic or any other medical-surgical procedure is performed.

– Initiate psychiatric referral or pharmacologic treatment as soon as possible.

– Increase dosage of SSRI or SNRI every 3 to 6 weeks as needed. Add additional oral agents as necessary.

– Severe cases may require anti-psychotic medications and psychiatric hospitalization if there is active suicidal ideation, self-destructive behavior, or a suicide attempt.

– Ideally, share management of patient with a mental health professional.

– Maintain vigilance for increased depressive symptoms or emergence of aggressive impulses directed toward self or others (suicidal or homicidal ideation or intent).

– Observe for positive response to treatment as manifested by decreased obsession and preoccupation with identified concern.

– Medications should be continued for minimum of 6 months after improvement in symptoms. May need continuous treatment to avoid relapse.

– If patient is a minor, educating parents is important to facilitate treatment and avoid cosmetic procedures.

If a patient presents with severe BDD symptoms, extensive skin excoriation with obvious scarring, the degree of clinical suspicion should be high for an active suicide risk. This patient needs an emergent psychiatric referral and/or family notification of the perceived imminent risk.

Conrado, LA. “Body dysmorphic disorder among dermatologic patients: Prevalence and clinical features”. J Am Acad Dermatol. vol. 63. 2010. pp. 235(This study looked at the prevalence of BDD in cosmetic patients [14%], general [6.7%] and control group [2%]. They discuss the clinical characteristics of patients with BDD to allow providers to refer these patients to mental health professionals.) 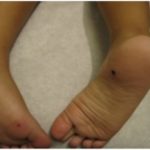