These lesions are usually present at birth as blue-black macular lesions found overlying the lumbosacral area (Figure 1). The lesions can range in size from 5mm to 10cm or more. The pigment will not accentuate when observed with a Wood’s lamp. The lesions can also be noted within the first few weeks of life. Dermal melanocytosis can also be seen higher up on the back, or the lesions can extend onto the buttocks and even onto the upper posterior thighs. Lesions are darkest at 1 year of age and often are noted to be fading by 3 years of age. 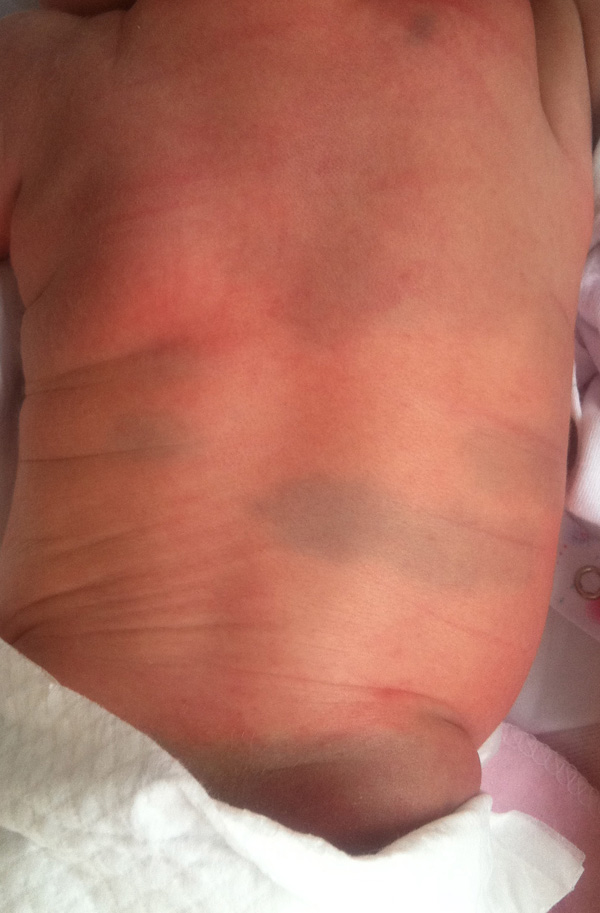 Histology of a biopsy specimen will show hyperpigmented spindle shaped melanocytes distributed in a parallel fashion between collagen fibers in the deep dermis. Some of the lesions that persist into adulthood may show histology similar to that of a blue nevus, with some melanocytes extending into the subcutaneous fat and even into muscle.

The differential diagnosis includes a large cafe-au-lait macule or blue nevus. In an older child, both post-inflammatory hyperpigmentation as well as a fixed drug eruption would be in the differential, but neither of these would be present at birth. Non-pigmented lesions, such as vascular malformations and deep cavernous hemangiomas, would also be in the differential, especially in very dark-skinned individuals. Lastly, linear and whorled nevoid hypermelanosis should also be considered if the pigmentation has a whorled pattern.

Dermal melanocytosis can be seen in up to 90% of Asian, African American, and Native American infants, but can be seen in infants of any race. There is no difference in the incidence between the sexes. The overall incidence is 255/1,000 live births. Lesions usually spontaneously regress in early childhood, but one study showed 4% of almost 10,000 Japanese men age 18 to 22 had a persistent lesion.

Dermal melanocytosis occurs when melanocytes fail to complete their migration from the neural crest to the basal layer of the epidermis. The melanocytes end their migration in the middle to lower dermis, where based on the Tyndall effect, their brown pigment gives the skin’s surface a blue-grey color. The Tyndall effect describes the phenomenon whereby shorter-wavelength colors such as blue are reflected at a more superficial level in the skin, thus producing the clinical lesion seen.

For most lesions of dermal melanocytosis there are no known complications and no systemic implications have been reported. Very rarely, extensive and multiple lesions of dermal melanocytosis have been seen in association with lysosomal storage diseases (notably GM1 gangliosidosis type 1) and with vascular malformations in phakomatosis pigmentovascularis.

Due to the benign and relatively self-limited nature of dermal melanocytosis, only a very few therapeutic clinical trials have been reported. As is the case for related lesions such as nevus of Ota and Ito, the Q-switched Alexandrite laser has been shown to be an effective modality for lightening lesions of dermal melaoncytosis.

Due to the benign and relatively self-limited nature of dermal melanocytosis, realistically no treatment other than reassurance and “expectant observation” is necessary. As is the case for related lesions such as nevus of Ota and Ito, the Q-switched Alexandrite laser has been shown to be an effective modality for lightening lesions of dermal melaoncytosis.

The only unusual clinical scenarios involving dermal melanocytosis are those cases with an atypical clinical presentation, such as a patient with either a very large lesion or multiple lesions as described in the complications section above. If large or multiple areas are seen in association with a vascular malformation, then a work-up for phakomatosis pigmentovascularis needs to be considered. In a complicated medical patient with a very large or multiple lesions of dermal melanocytosis, a work-up for the lysosomal storage diseases should be included in the patient’s overall evaluation.

Kikuchi, I. “The biological significance of the Mongolian spot”. Int J of Dermatol. vol. 28. 1989. pp. 513(A good historical review of dermal melanocytosis, which was previously known as Mongolian spot.)

Gilchrest, BA, Fitzpatrick, TB, Anderson, RR, Parrish, JA. “Localization of melanin pigmentation on the skin with Wood’s lamp”. Br J Dermatol. vol. 96. 1977. pp. 245(An early review of a number of pigmentary disorders, including what has come to be known as dermal melanocytosis, using the Wood’s lamp to highlight the location of the pigmentation in each disorder.) 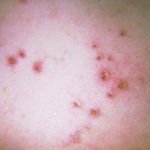 Demodicidosis (Other acariasis, including chiggers and Demodex folliculorum or Trombicula infestation)