Dr Freedman also noted that self reported information was collected by face-to-face or telephone interviews and certain behaviors may be underreported due to social desirability bias. 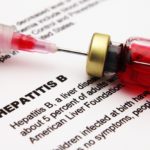