Across infectious diseases, the time taken to initiate appropriate antimicrobial therapy is an important determinant of outcome. The classic protocol for identifying pathogens and their susceptibility to treatment involves culturing the potential infection site, recovering microbes, and determining phenotypic antimicrobial susceptibility based on established minimal inhibitor concentration (MIC) breakpoints. With this protocol, the identification of antimicrobials that are active against a pathogen typically takes at least 48 to 72 hours. Years ago, clinicians could begin empiric antimicrobial therapy with reasonable confidence that their choice would cover the infectious pathogen. With the increasing emergence of resistant bacterial pathogens, however, the spectrum of potentially active agents has narrowed in many instances. Thus, it is critical for clinicians to know the organisms they are dealing with at their centers, as well as antimicrobial susceptibility patterns. This is particularly true for Gram-negative bacterial infections, which continue to present a particularly difficult challenge.

Within the past 5 years, new antimicrobial agents with activity against Gram-negative bacteria have come through the pipeline. Three agents — ceftolozane-tazobactam (Zerbaxa®), ceftazidime-avibactam (Avycaz®), and meropenem-vaborbactam (Vabomere™) — have been approved between 2014 and the end of 2017.1-4 Most recently, plazomicin (Zemdri™), which has shown in vitro activity against most multidrug-resistant (MDR), extensively drug-resistant (XDR), and pandrug-resistant Enterobacteriaceae1,5-8 and compared favorably with meropenem against Enterobacteriaceae, aminoglycoside-nonsusceptible bacteria, and extended-spectrum β-lactamase (ESBL)-producing organisms,1,9 was approved by the US Food and Drug Administration (FDA) on June 26, 2018.10 As presented at the ASM Microbe 2018 conference in Atlanta, Georgia, data collected in the United States as part of the Study for Monitoring Antimicrobial Resistance Trends (SMART) in 2016–2017 show that ceftolozane-tazobactam continues to have activity against Pseudomonas aeruginosa, with an overall susceptibility rate exceeding 90% and a rate of approximately 80% among organisms that are not susceptible to β-lactams.11

As noted by Keith Rodvold at ASM Microbe 2018, several new drugs that are active against highly resistant, Gram-negative bacteria are nearing approval. Cefiderocol has shown in vitro activity against ESBL-producing, Klebsiella pneumoniae carbapenemase (KPC)-producing, and metallo-β-lactamase-positive Enterobacteriaceae, and MDR P aeruginosa, Acinetobacter baumannii, and Stenotrophomonas maltophilia.1,6,12-15 It has compared favorably with imipenem-cilastatin in phase 3 trials.1,6,16,17 Intravenous fosfomycin, which has been available outside the United States, has proven noninferior to piperacillin-tazobactam among patients with complicated urinary tract infections (cUTI) or acute pyelonephritis in the ZEUS trial.1,18 The phase 3 IGNITE-1 and IGNITE-4 trials have shown that intravenous eravacycline performs similarly to ertapenem and meropenem in patients with complicated intra-abdominal infections (cIAI).19,20 Imipenem-relebactam has shown microbiologic response rates of at least 96% among patients with cUTI and clinical response rates of at least 94% among patients with cIAI in phase 2 trials.1,21,22

Several poster presentations at ASM Microbe 2018 provided more data on the activity of these agents, particularly imipenem-relebactam. Carpenter and colleagues reported that imipenem-relebactam had the lowest MIC values among all agents tested against carbapenem-resistant Enterobacteriaceae (MIC50 ≤ 0.25 mcg/mL, MIC90 0.5 mcg/mL),23 whereas Kulengowski and colleagues found MICs for imipenem-relebactam ranging from 0.06 to 8 mg/L among non-metallo-β-lactamase producers.24 Several posters summarized data on isolates collected from the United States and Europe from 2015 through 2017 as part of the SMART program. These posters reported susceptibility rates for imipenem-relebactam of 88.3% to 97.3% against MDR Enterobacteriaceae and 92.9% to 96.8% against KPC-producing isolates.25,26 The posters also showed susceptibility rates of 89.6% to 93.7% overall against P aeruginosa and 68.7% to 80.5% against MDR isolates.27,28 On the basis of IGNITE-1 and IGNITE-4 data, Ditch and colleagues reported comparable microbiologic and clinical cure rates, both ranging between 87% and 100%, between eravacycline and comparators against cephalosporin-resistant and MDR Enterobacteriaceae and A baumannii and against ESBL-producing Enterobacteriaceae.29 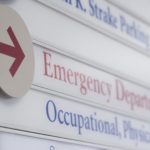 Evaluation of Appropriateness of Ceftriaxone Use in the Emergency Department