HealthDay News — Receipt of the Ad26.COV2.S (Janssen/Johnson & Johnson) COVID-19 vaccine is associated with a potential small, but statistically significant, safety concern for Guillain-Barré syndrome (GBS), according to a study published online Oct. 7 in the Journal of the American Medical Association.

The researchers identified 130 reports of presumptive GBS in the VAERS following Ad26.COV2.S vaccination as of July 24, 2021. The median time to onset of GBS was 13 days following vaccination; 105 cases (81.4 percent) and 123 cases (95.3 percent) began within 21 and 42 days, respectively. Overall, 121 reports (93.1 percent) were serious, including one death. The estimated crude reporting rate was one case of GBS per 100,000 doses administered based on about 13,209,858 vaccine doses administered to adults in the United States. For the 42-day window, the overall estimated observed-to-expected rate ratio was 4.18. In the worst-case scenario analysis for adults aged 18 years and older, this corresponded to an estimated absolute rate increase of 6.36 per 100,000 person-years (about 8.36 cases per 100,000 person-years compared with a background rate of about two cases per 100,000 person-years).

“The absolute risk of GBS, both in the background population (≈2 per 100 000), and following Ad26.COV2.S vaccination (130 reports per ≈13 million vaccinations), is extremely small and far lower than the risk of COVID-19,” the authors write. 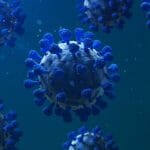 More Than Half of COVID-19 Survivors Have Postacute Sequelae