For patients hospitalized with COVID-19, urinary neutrophil gelatinase-associated lipocalin (uNGAL) concentration was found to be a significant predictor of severe acute kidney injury (AKI) and worse clinical outcomes, according to results of a prospective cohort observational study published in Kidney International Reports.

Investigators analyzed data from consecutive patients with confirmed SARS-CoV-2 infection admitted to the Columbia University emergency department (ED) in New York between March and April 2020. The investigators measured molecular biomarkers uNGAL and urinary kidney injury molecule 1 (uKIM-1), which have shown sensitive and real-time detection of AKI from urine samples collected on admission via enzyme-linked immunosorbent assay (ELISA) and a novel dipstick that measures uNGAL at the bedside. They analyzed kidney biopsy specimens to determine biomarker RNA and histopathologic acute tubular injury (ATI) scores. Primary outcomes were serum creatinine-based AKI, AKI Network (AKIN) stage, and the duration of consistently increased concentrations of serum creatinine among patients in both groups. Patients with SARS-CoV-2 infection were compared against a cohort of patients without the infection who were recruited in an identical manner between June 2017 and January 2019.

Among patients with SARS-CoV-2 infection, uNGAL concentrations were associated with an increased risk for AKI (P <.0001), increasing in a stepwise fashion with AKIN stages (P <.0001). In addition, uNGAL concentrations greater than 150 ng/mL were associated with a specificity and sensitivity of 80% and 75%, respectively, in diagnosing AKIN stages 2 to 3. The investigators found that patients with decreased uNGAL concentrations on admission had a decreased risk for stage 2 and 3 AKI (negative predictive value (NPV), 0.95; 95% CI, 0.92-0.97) and the need for dialysis (NPV, 0.98; 95% CI, 0.96-0.99). This association was found to be independent of age, sex, race, ethnicity, baseline serum creatinine concentration, proteinuria, and other comorbidities.

In a subgroup analysis of 198 patients with COVID-19 without evidence of AKI on admission to the ED, uNGAL concentrations were increased among those who subsequently developed stage 1 to 3 AKI within 7 days compared with those who did not develop AKI (P <.05).

The risk for requiring dialysis increased almost 4-fold per standard deviation of uNGAL concentrations among patients in the COVID-19 group, independent of baseline serum creatinine concentrations, comorbidities, and proteinuria (odds ratio, 3.59; 95% CI, 1.83-7.45; P <.001). In addition, uNGAL concentrations were found to be quantitatively associated with prolonged AKI, shock, prolonged hospitalization, and in-hospital death, including among those with increased baseline serum creatinine concentrations on admission. The kidneys of patients with COVID-19 exhibited broad NGAL mRNA expression in parallel with severe histopathologic injury (ATI). In addition, neither proteinuria nor uKIM-1 were diagnostic of AKI or AKIN stages among patients in the COVID-19 group. 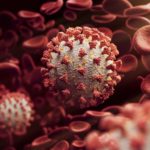 HScore as a Predictor for Severe COVID-19 Outcomes