Testing for human papillomavirus (HPV) through a mail-based self-test holds promise as a means to reach underscreened women, according to results of a study conducted among women in Appalachian Ohio and published in Sexually Transmitted Diseases. Response rates were high, as were levels of satisfaction for women who used the self-test.

This pilot study involved sending HPV self-tests to 103 women in Appalachian Ohio, aged 30 to 65 years, who had not received a Pap test within the past 3 years. The participants were randomly assigned 1:1 to either the intervention (detailed information and instructions written by the Health Outcomes through Motivation and Education [HOME] Project) or the control (generic information and instructions written by the manufacturer).

Of the overall sample, 78% (n=80) sent back their self-test for HPV; a return rate which was similar for both the intervention and control participants. Reasons for not returning the self-test included forgetting (27%), concern about pain associated with the test, not enough time, concern that they might incorrectly use it, and concern over receiving a positive result (13% each).

Respondents reported high satisfaction and a positive experience with the self-test, with more than 90% reporting the test was easy to use, convenient and they would be willing to use an HPV self-test again and to recommend it to other women. Oncogenic HPV was detected in 26% of returned samples. During the study, only women who had returned their self-test received Pap tests. This rate was similar for the intervention (14%) and control (8%) groups, with an odds ratio (OR) of 1.91 (95% CI, 0.52-6.97). Women whose self-test detected a high-risk HPV type were more likely to receive a Pap test than those whose self-test did not detect a high-risk HPV type (33% vs 7%; OR=6.88; 95% CI, 1.76-26.82).

The researchers noted that a modest response rate and small sample size limited the scope of the analyses. 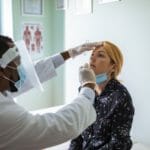