HealthDay News — The unique immunologic status of pregnant women might alter the disease presentation and progression of Ebola virus disease (EVD), according to a letter published in the New England Journal of Medicine.

A new case report describes a 31-year-old woman in late pregnancy who went to a hospital in Liberia complaining of mild lower abdominal pain, possibly pregnancy-related.

Routine Ebola testing revealed she was infected with the virus, though she had no obvious symptoms, such as body pain, vomiting and diarrhea, or bleeding. After three days, however, EVD symptoms emerged. The patient and her unborn child died several days later.

The researchers suspect the woman’s reduced immune response due to the pregnancy could have allowed the virus to remain in her body undetected for some time.

“This case highlights the challenges that clinicians may face in assessing pregnant women for possible infections, including EVD, and the potential risk for health care staff,” Emma Akerlund, MD, of Doctors Without Borders, and colleagues write in the letter. It’s possible that she could have infected others before her symptoms appeared, the researchers said. But experts said the implications really aren’t clear. 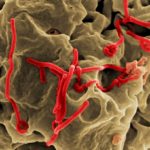