A glutamate dehydrogenase (GDH) test for Clostridioides difficile may reduce unnecessary isolation time for patients, according to study results published in the European Journal of Clinical Microbiology & Infectious Diseases.

The most common cause of nosocomial infectious diarrhea is C difficile infection (CDI). Nosocomial outbreaks occur regularly and therefore pose a risk for patients due to the mortality and morbidity rates associated with CDI. To prevent outbreaks, contact isolation is usually followed for patients with suspected CDI, as a result of the current delays in diagnosis and an absence of adequate infection prevention measures; many hospitals have a delay between feces collection and testing. This can result in unnecessary isolation periods, which lead to increased cost and workload.

Therefore, a screening test for C difficile may benefit patients, the hospital, and hospital workers. There are currently several rapid screening tests available, including a GDH test and a toxin A&B enzyme immunoassay (EIA). Testing recommendations for CDI vary, but despite these recommendations, no optimal diagnostic algorithm exists to aid decision-making for whether contact precautions should be continued or discontinued exist. Therefore, this retrospective pre- and post-implementation study described the effect of implementing a rapid screening test (GDH) and evaluated the diagnostic accuracy of the GDH test and the clinical value of a toxin A&B EIA in daily clinical practice based on antibiotic treatment initiation against C difficile.

Compared with NAAT, the GDH test had a sensitivity of 87.9%, with a negative predictive value of 98.8% and a positive predictive value of 65.0%. These results suggested that the GDH test is suitable to determine whether contact isolations should be continued or discontinued. The median time of isolation in the pre-implementation stage was 50.8 hours in patients who were NAAT-negative and placed in isolation precaution (n=189); after GDH implementation, there was a significant reduction with a median time in isolation of 28.0 hours (n=119; P <.001).

Because contact isolation can lead to increased costs and suboptimal care, the reduction in duration of isolation could be beneficial for patients. In addition, compared with the median time from arrival of the sample to the first test result was also significantly shorter: 26.9 hours pre-implementation and 1.2 hours postimplementation (P <.001). The median time from order to result reported to the hospital was also significantly different: from 32.9 hours pre-implementation to 17.7 hours postimplementation (P <.001). Toxin A&B EIA provided no significant difference between the number of patients with a negative or positive result.

Overall, the study authors concluded that, “[O]ur study demonstrates a reduction of unnecessary patient’s time in contact isolation by implementing a GDH test in a random-access manner, based on which isolation precautions were discontinued.” 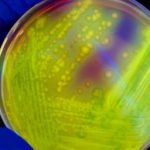