HealthDay News — All U.S. adults younger than 60 years should be vaccinated against hepatitis B, the Advisory Committee on Immunization Practices recommended Wednesday.

Until now, the shots were recommended only for certain groups of adults, including prisoners, health care workers, international travelers, people with diabetes and certain other conditions, and those who inject drugs or who have multiple sexual partners, the Associated Press reported. Hepatitis B vaccinations became standard for U.S. children in 1991, so most adults younger than 30 years are already protected.

The government advisory committee’s unanimous decision — which still requires the approval of the U.S. Centers for Disease Control and Prevention — comes as progress against the liver-damaging disease stalls. It is not clear when CDC Director Rochelle Walensky, M.D., will make a decision on the committee’s recommendation. If she gives the OK, tens of millions of adults between the ages of 30 and 59 years would be advised to get the shots against the liver-damaging disease, the AP reported.

The shots are given in either two or three doses, spaced a month or more apart. CDC data suggest that only about one-third of people with diabetes and chronic liver conditions have been vaccinated, in addition to just two-thirds of eligible health care workers, the AP reported. Overall, about 30 percent of all adults are vaccinated.

Roughly 1.9 million Americans are living with hepatitis B infections, though many may not experience liver damage for many years. The U.S. government has set a goal of eliminating viral hepatitis by 2030.

Hepatitis Hepatitis B Vaccination Vaccines
Next post in Hepatitis 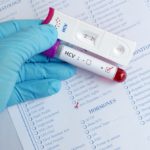