Alcohol-associated intestinal dysbiosis in people living with HIV was found to be associated with higher levels of CD8+ T-cell senescence, according to study results published in The Journal of Infectious Diseases.

In post-hoc analyses, researchers analyzed alcohol use data and whole-blood samples from 359 participants in the New Orleans Alcohol Use in HIV study to explore the association between intestinal leak, dysbiosis, and T cells. The subset was composed primarily of virally suppressed, middle-aged African American men (n=251, 51% men who have sex with men) who exhibited relatively high adherence to antiretroviral therapy (ART).

The researchers tested a base and an extended set of covariates to assess the influence of confounding variables. In the base model, adjustments were made for chronological age, body mass index, self-reported sex, African American race, male-male sexual preference, ART adherence >90% of doses, detectable HIV viral load (>20 copies/mL), hepatitis C coinfection, and antibiotic use in the preceding 4 months. Extended models adjusted for the base model covariates plus current smoke-tobacco use, pack-years, days of substance use in the past month, and total years of substance use. In extended models where alcohol variables were not predictors of interest, the 30-day alcohol timeline followback and lifetime alcohol exposure variables were added as potential confounders.

Recent alcohol use as measured by the 30-day alcohol timeline followback failed to associate with any CD8+ T-cell population in contrast to phosphatidylethanol (PEth) quantitation. PEth was positively associated with activated-senescent and exhausted CD8+ T cells in the base (β=0.047; P =.010 and β=0.084; P =.005, respectively) and extended (β=0.039; P =.034 and β=0.061; P =.042, respectively) models.  In addition, PEth was positively associated with the α-1-antitrypsin fecal:plasma ratio in the base and extended models (β=0.035; P =.016 and β=0.039; P =.012, respectively), suggesting that intestinal barrier compromise may accompany recent alcohol use.

Both PEth and activated-senescent CD8+ T-cell levels were significantly associated with fecal bacterial β-diversity after covariate adjustment, including men who have sex with men status, and were positively associated with the relative abundance of co-abundant Prevotellaceae members. “Whether products of Prevotella metabolism exert a deleterious effect (i.e. senescence induction) on CD8+ T-cells remains to be tested,” stated the researchers. They added, “The exploratory mediation analyses performed herein offer some evidence in support of a model whereby alcohol-associated relative expansion in intestinal Prevotella exacerbates peripheral CD8+ T-cell senescence.” 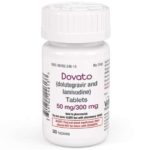 Dovato Use Expanded to Include Virologically Suppressed Adults With HIV-1