Using data obtained from a large cohort collaboration conducted in 12 countries in Europe between 2000 and 2014, researchers aimed to evaluate the relationship between CD4/CD8 ratio restoration and the risk for KS or NHL in patients with HIV infection who achieved virologic control (plasma HIV-1 RNA ≤ 500 copies/mL) within 9 months of initiating treatment with cART. A secondary analysis included a total of 19,133 patients with CD4 counts of 500/mm3 or greater at baseline.

Limitations of this study included “the absence of information on KS clinical presentation, NHL histological subtypes, and viral serostatus associated with NHL,” the researchers noted.

“Further studies are needed to clarify the impact of the CD4/CD8 ratio on the risk for other HIV-related diseases, to know which specific preventives measures could be implemented,” the researchers concluded. 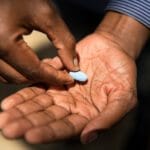