A silicon, vaginal ring infused with the anti-HIV drug dapivirine has been used “at least some of the time” in 89% of women who were given the option in a follow-up trial. The results were announced as part of preliminary findings from the phase 3b HOPE trial at CROI 2018, held March 4-7 in Boston, Massachusetts.1

Over 1400 women who participated in ASPIRE enrolled in HOPE; study patients were sexually active, HIV-negative women aged 20 to 49 years. They are being offered the dapivirine ring for a month at a time for up to 12 consecutive months. During the first 3 months, the women attend monthly study visits where they may obtain a new ring. They then attend quarterly visits where they may receive 3 rings at a time.

As of October 2017 — the cut off date for interim analysis — 89% of the rings returned had residual dapivirine levels consistent with some use in the prior month. This level of some use in the prior month was ~16% greater than that seen in the ASPIRE trial. Moreover, the rate of study participants developing a new HIV infection was 1.9 per 100 person-years of follow-up. For ASPIRE participants receiving placebo, a mathematical model showed an average HIV incidence of 4.1 new infections per 100 person-years —  approximately twice the rate seen in the new HOPE interim analysis.

“Interim data from the HOPE open-label extension study appear to be sending a positive signal about the desirability of the anti-HIV vaginal ring in a setting more like the real world than previous trials,” said Carl W. Dieffenbach, PhD, director of the Division of AIDS at the National Institute of Allergy and Infectious Diseases.3 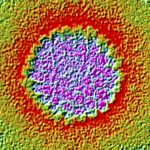