A total of 31 participants with symptomatic congenital CMV infection were included in the study. Investigators reviewed the patients’ medical records and MRI images retrospectively and assessed the associations between MRI findings and neurologic outcomes, specifically neurodevelopmental achievement, epilepsy, and sensorineural hearing loss. Structured examinations, including the Korean Infant and Child Development Test, the Bayley Scales of Infant and Toddler Development Third Edition, and the Denver Developmental Screening Test, were used to evaluate developmental outcomes.

In addition, the presence of microcephaly among patients with congenital CMV infection was significantly associated with delayed development (P =.003) and epileptic seizure (P =.001). Calcification (P =.006), polymicrogyria (P =.012), ventriculomegaly (P =.045), and white matter abnormalities (P =.018) were also significantly associated with epilepsy. Using these MRI variables, the investigators constructed a brain MR CMV scoring scale that was effective for predicting the development of epilepsy in this patient population (odds ratio 3.62; 95% CI, 1.52-8.67; P =.004).

The study’s limited sample size as well as its retrospective design represent 2 primary limitations associated with the findings. Additionally, the investigators did not adjust for or assess the presence of other comorbidities such as cerebral palsy or hidden genetic disorders when performing the analysis.

Based on the findings, the investigators suggest that a CMV MR score, which includes variables such as the presence of calcification, polymicrogyria, and white matter abnormalities, may “be used to guide the patients with congenital CMV infection with their treatment and follow-up monitoring plan.” 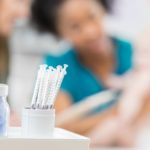 MenACWY-TT Vaccine Can Be Effectively Coadministered With Routine Pediatric Immunizations