Recognizing that skeletal muscle may be of major relevance among multiple organs impacted by COPD, the researchers sought to evaluate the effects of probiotics on sarcopenia (an age-related muscle impairment) and physical capacity in patients with COPD. It is well known that most individuals with COPD develop muscle weakness and atrophy, which, in turn, contribute to functional compromise. Despite these findings, however, an effective bedside treatment remains elusive.

Study investigators conducted a randomized, double-blind, computer-controlled, multicenter trial among outpatients with COPD in 2 tertiary care hospitals in Pakistan — the Gomal Medical College in Dera Ismail Khan and the Rehman Medical Institute in Peshawar. The main outcome measures of the study were sarcopenia phenotype, short physical performance battery (SPPB), plasma markers of intestinal permeability (zonulin and claudin-3) and NMJ degradation (CAF22), handgrip strength (HGS), and body composition — both prior to and following treatment with probiotics. The intervention used was Vivomix 112 billion, which was administered as 1 capsule per day for 16 weeks. Each capsule contains 112 billion bacteria.

The researchers enrolled 104 patients in the study; all were men with stable COPD between 63 to 73 years of age. Any individual who had taken a probiotic and/or an antibiotic in the past 6 weeks was excluded from the study, as were patients with unstable COPD, myopathies, arthritis, digestive disorders, malignancies, liver diseases, or hospitalization in the past month. A central computer system randomly allocated 51 patients into the probiotic group and 53 into the placebo group. Ultimately, 4 patients from the probiotic group were excluded from the study because of poor compliance, leaving 47 patients in the intervention arm and thus 100 patients to be analyzed.

Investigators defined COPD, based on guidelines by the global initiative for chronic obstructive lung diseases, as forced expiratory volume in 1 second (FEV1) /forced vital capacity (FVC) of <0.7 with persistent respiratory symptoms. FEV1 and FVC were measured via use of a portable spirometer, based on standards set by the American Thoracic Society.

Results of the study showed that probiotic use was associated with significantly decreased levels of plasma zonulin, claudin-3, and CAF22, along with significantly improved HGS, gait speed, and SPPB scores (P <.05 for all). Probiotic treatment was also associated with significant reductions in plasma C-reactive protein and 8-isoprostane levels — markers of systemic inflammation and oxidative stress (P <.05).  Per correlation analysis, varying degrees of association of plasma biomarkers with sarcopenia indices were observed, although a reduction in sarcopenia prevalence was not reported in the probiotic group.

The researchers concluded that the results from the current study “implicate that the probiotic mixture could enhance physical functional performance and muscle strength in elderly patients with COPD.” These findings support the notion that increased gut permeability negatively affects skeletal muscle in COPD, due partly to the disruption of NMJ. 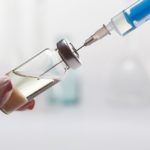