The Centers for Disease Control and Prevention (CDC) reported that the seasonal influenza vaccine prevented over 40,000 influenza-associated deaths in the U.S. during 2005–2006 through 2013–2014. The new study is published in the journal Vaccine.

The greatest prevention was seen during the 2012–2013 season with nearly 9,400 deaths prevented by vaccination (95% CI: 2,386–19,897) even though the vaccine efficacy was modest that season. The least prevention was seen during the 2009 pandemic with 222 deaths prevented by vaccination (95% CI: 79–347). This may have been due to the fact that the 2009 monovalent pandemic vaccine did not become widely accessible until after the peak of influenza. 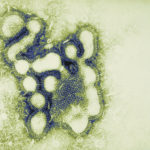