MF59 is a proprietary adjuvant that consists of an oil-in-water squalene-based emulsion. Study authors aimed to evaluate the relative efficacy, immunogenicity, and safety of MF59 aQIV vs a standard non-adjuvanted trivalent or quadrivalent inactivated influenza vaccine in children aged 6 months through 5 years by conducting a phase 3 multicenter, randomized-controlled, observer-blinded trial (N=10,644). Vaccine-naive patients were given 2 doses of the study vaccine whereas non-naive patients received only 1 dose.

The primary outcome was relative vaccine efficacy as assessed by RT-PCR-confirmed influenza due to any influenza strain. Other outcomes measured included immunogenicity against homologous and heterologous strains of influenza, as well as safety.

Among patients aged 6 to 23 months, significant relative vaccine efficacy was observed with the aQIV vaccine vs the comparator vaccine (relative efficacy 31.37; 95% CI, 3.14-51.38). However, this difference was not seen in the overall study population (relative efficacy -0.67; 95% CI, -19.81 to 15.41). The data also showed that MF59 aQIV induced a superior immunogenic response in children aged 6 months to 5 years against both homologous and heterologous strains. The highest geometric mean titer ratios, however, were seen in patients aged 6 to 23 months.

The safety profiles were similar for both vaccine arms but adverse events were reported more frequently with the aQIV vs comparator vaccine.

The authors concluded, “Although there was no additional benefit of [aQIV] compared with the US-licensed non-adjuvanted influenza vaccines in the overall study population, in the youngest and most vulnerable population of children in this trial, [aQIV] provided greater protection against influenza than a non-adjuvanted vaccine when assessed in this prespecified age group of 6 through 23 months.” 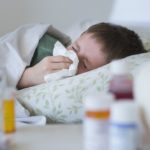