Infants born to mothers who were vaccinated with trivalent inactivated influenza vaccine (IIV3) during pregnancy received protection against acute lower respiratory infections (ALRI), according to a study published in Clinical Infectious Diseases.1 The study was the first randomized placebo-controlled trial to assess the efficacy of influenza vaccination during pregnancy on severe respiratory outcomes in infants.

Although the incidence of childhood ALRI mortality has declined in recent years, pneumonia was responsible for an estimated 0.9 million deaths and 15 million hospitalizations among children younger than 5 years in 2015 and 2010, respectively. Some researchers have postulated that infection with influenza may increase the risk for ALRI acquisition.

To determine whether maternal influenza vaccination prevented hospitalization for ALRI in infants <6 months of age, a research team led by Marta C. Nunes, PhD, from the University of the Witwatersrand, Johannesburg, South Africa, analyzed data from a prior randomized, placebo-controlled trial of IIV3 vaccination in pregnant HIV-uninfected and HIV-infected South African women. Results from that trial showed that the vaccine was safe, immunogenic, and protected both HIV-exposed and unexposed infants from confirmed influenza for up until 24 weeks after birth.1

Only the HIV-uninfected cohort was analyzed for the present study. It consisted of 1026 infants born to uninfected IIV3 recipients, and 1023 infants born to uninfected placebo recipients. The infants were born a mean of 81 days (range, 1-175 days) after their mother’s receipt of vaccination and were followed-up for a median of 172 days (interquartile range [IQR], 168-175). Most of the follow-up period took place under conditions of high influenza circulation.

For the purposes of the study, ALRI hospitalization was defined as a hospital discharge with a principal or secondary diagnosis of pneumonia, bronchiolitis, or unspecified acute lower respiratory tract infection.

“Using our randomized, placebo-controlled clinical trial as a vaccine probe, we demonstrate that vaccination with IIV during pregnancy reduced the risk for all-cause ALRI hospitalization by 57.5% during the first 90 days of life,” wrote the investigators. “Notably, this observation was independent of identifying influenza virus among the ALRI cases. This suggests that the benefits of protecting against influenza virus infection during early infancy might extend beyond protecting only against influenza-confirmed illness.” 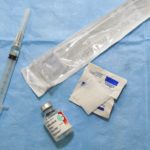