Treatment with antibiotics, as well as FMT, affected the composition of gut microbiota in the CS mice. Parabacteroides goldsteinii (Pg) was significantly, negatively associated with COPD severity.

The lipopolysaccharide (LPS) that was derived from Pg-LPS acted as a toll-like receptor 4 antagonist and was an active component that ameliorated CS-induced COPD, noted the investigators.

“Our study highlighted the important causality role of gut microbiota in COPD pathogenesis and established the gut-lung COPD axis,” stated the researchers. “Pg MTS01 and Pg-LPS are potential therapeutic agents that may be developed into functional probiotics and postbiotics, respectively, to ameliorate COPD.” 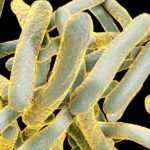 Pravastatin May Have Protective Effect Against Active Tuberculosis Infection