A double-blind trial published in the New England Journal of Medicine found omadacycline to be noninferior to moxifloxacin for the treatment of community-acquired bacterial pneumonia (ClincalTrials.gov identifier: NCT02531438).

The primary endpoint for this trial was early clinical response, defined as survival with improvement in at least 2 of 4 symptoms and no worsening of symptoms at 72 or 120 hours, without the need for rescue antibacterial therapy. The 4 included symptoms were cough, sputum production, pleuritic chest pain, and dyspnea. An investigator-assessed clinical response of resolution or improvement in signs or symptoms to the extent that further antibacterial therapy was unnecessary 5 to 10 days after the last dose was used as a secondary endpoint, along with a noninferiority margin of 10%.

Investigators excluded or limited the inclusion of patients who were immunocompromised and those with severe pneumonia, which reduced the generalizability of the results. The same was done for patients with pneumonia severity index risk class I or II because they have fewer risks for death, and therefore are less commonly admitted to hospital for initial treatment than those at higher risk. Extensive microbiologic testing in this trial resulted in a bacterial pathogen being identified in 50% of patients. According to investigators, real-world cases of community-acquired bacterial pneumonia are identified approximately 10% of the time; therefore, empirical therapy, “must be chosen with common respiratory pathogens and contemporary local susceptibility taken into consideration.”

The results led investigators to conclude that intravenous, once-daily omadacycline, with the option to transition to oral administration, was “noninferior to moxifloxacin as empirical monotherapy for non-ICU hospitalized adults with community-acquired bacterial pneumonia.” 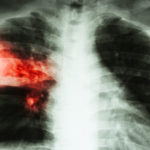 Benzodiazepine Use May Increase Risk for Pneumonia