Testing errors and reinfection should be considered when performing tests of cure for gonorrhea, according to a study published in Clinical Infectious Diseases.

Samples were then analyzed using the Aptima Combo 2 RNA-based nucleic acid amplification tests (NAATs) or the Cobas 4800 DNA NAATs. Researchers defined infection cure as 3 negative results in succession, and blips as a single positive result after cure. Researchers noted in the study that NAATs are accepted as being superior to bacterial cultures because of greater sensitivity.

Of the 77 patients, 5 were reported self-cleared before treatment by researchers. Ten patients had no follow up. The researchers reported a 100% cure rate for the remaining 62 patients. “Median time to clearance was 2 days, with a range of 1–7 days for RNA-based NAAT and 1–15 days for DNA-based NAAT. The risk of finding a blip after clearance was 0.8% and 1.5%, respectively,” Dr Wind and colleagues wrote. One patient was reinfected. More than 95% of samples tested with RNA NAAT had cleared after 7 days, while more than 95% of samples using DNA NAAT had cleared after 14 days.

Dr Wind and colleagues noted that their study had some limitations, notably, it was a single-center study on a high-risk population, it did not include pharyngeal gonorrhea, multivariable analysis of connections of cure or blips was not available due to multicollinearity and there was no confirmation of cure because of the lack of information about the viability of the bacteria detected by NAAT.

In an editorial commentary on the study, Lindley A Barbee, MD, MPH, and Matthew R Golden, MD, both of the Division of Allergy and Infectious Diseases in the Department of Medicine at the University of Washington, and the Public Health–Seattle & King County HIV/STD Program in Seattle said the study was at odds with a study by Beymer and Colleagues in Los Angeles. In that study of 95 men examined using RNA NAAT, none of the 95 men with urethral gonorrhea had a positive test of cure 6 to 21 days following treatment. Ten in 135 men had a positive rectal gonorrhea test 7 or more days following treatment, and 7 of 134 with pharyngeal gonorrhea had a positive test 3 to 14 days after treatment.

“These positive tests were probably all or almost all false positives, as the majority of persons with a positive NAAT were culture negative, and among 12 of 14 without an identified reexposure to gonorrhea retested >21 days following treatment, all were NAAT negative,” Dr Barbee and Dr Golden said in the commentary.

They noted that it was unclear if the benefits of performing test of cure outweigh the costs. “Assuming that at least 95% of these infections would be cured using CDC guideline–recommended or alternative therapies, clinicians would need to perform 2000 TOCs to identify a resistant isolate that had failed therapy,” they wrote. They concluded that test of cure for most persons with gonorrhea should not be a routine measure – and that it should be targeted to individuals who receive nonstandard treatment or have persistent infections. 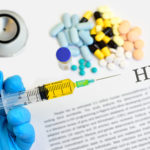