In an investigation of Lyme disease risk in the urban setting of New York City, forest parks with vegetated buffers and increased connectivity had higher Ixodes scapularis nymph densities, and the degree of connectivity strongly determined Borrelia burgdorferi nymphal infection prevalence, according to data published in Emerging Infectious Diseases.

Because most tickborne disease studies in the United States are carried out in low-density residential and forested areas, little is known about urban infection risks. Therefore, investigators conducted tick surveys in 24 parks in the 5 boroughs of New York City and used circuit theory models to determine how parks differentially maintain landscape connectivity for tick reproductive hosts, white-tail deer.

At least 1 I scapularis was found in 17 of the 24 parks and of these 10 had > 6 nymphs and were categorized as established for tick populations. All but 1 of those 10 parks, which was found in Pelham Bay Park in the Bronx, were on Staten Island. Investigators used these 10 sites to estimate nymphal infection prevalence with B burgdorferi. A total of 8% to 40% of ticks tested at each site were positive for B burgdorferi, and average infection prevalence was 26.6%. Investigators also found that the presence of ticks was best explained by the distance between parks and that flow centrality of parks, which is an indicator of the connectivity of parks for deer and other hosts, had the biggest positive effect on both density and infection prevalence of nymphs. Covariates describing the composition of the landscape surrounding the parks, such as percentage of tree canopy, had a positive effect on nymph density, whereas the percentage of water and soil had a negative effect.

According to investigators, these results show that landscape composition and configuration have direct implications for the risk of acquiring Lyme disease. Further, while investigators also acknowledged that urban green spaces and initiatives to increase their numbers have clear benefits for society, climate change mitigation and wildlife conservation, “our study calls attention to the need to understand the drivers of tick distribution and densities within urban green spaces in the United States.” 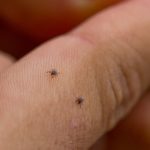 Tick-Borne Powassan Virus Is On the Rise: What Your Patients Should Know