Symptomatic infection with dengue during pregnancy did not lead to congenital malformations or low birth weight, according to a retrospective observational cohort study recently published in Lancet Infectious Diseases. However, maternal dengue infection was associated with the risk for premature birth.

Previous studies on the influence of dengue on fetal outcomes have yielded conflicting results. Although reports of congenital malformations resulting from maternal dengue have been rare, some studies have suggested that dengue infection in pregnant women is associated with premature birth and low birth weight. Other studies have found no adverse consequences.

To investigate the association between symptomatic dengue infection during pregnancy and adverse fetal outcomes, Laura B. Nascimento, PhD, from the Institute of Tropical Pathology and Public Health, Federal University of Goiás, Goiânia, Brazil, and colleagues used Brazil’s national reportable communicable disease information system (SINAN) to identify pregnant women reported to be infected with dengue and subdivided the women into dengue-positive and dengue-negative groups. The dengue-positive designation was based on results from 1 of several specific laboratory tests, whereas the dengue-negative designation was based on an ELISA immunoglobulin M-negative test. These records were matched with those from Brazil’s live birth information system (SINASC), which collects information on live birth characteristics including prenatal care and neonatal health.

Of the 56,817 pregnant women in SINAN with reported dengue, 11,382 were dengue-positive and 9351 were dengue-negative. Records with incomplete, inconsistent, or duplicate information were excluded from the analysis. Only true matches between SINAN and SINASC, as ascertained by Fine-Grained Record Integration and Linkage software analysis followed by manual review, were included. The researchers also looked at outcomes from a reference population from SINASC of randomly selected newborn infants matched for each dengue-positive case by municipality and year of infection. The study ultimately included live birth outcomes from 3898 dengue-positive pregnant women, 3165 dengue-negative pregnant women, and 3898 newborn babies from the reference population.

“Our findings support those of previous reports on the link between symptomatic dengue infection during pregnancy and preterm birth, and the absence of an association with congenital malformations,” wrote the research team. “Further prospective studies should be done to confirm our findings. 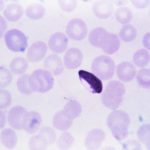 Placental Malaria and Risk of Malaria Infection in Childhood